To realise a clean, fair sport and to protect its integrity, JADA conducts a variety of surveys and research on the awareness, attitudes and behaviour of athletes and their athlete support personnel towards anti-doping and the fairness and integrity in sport and society.

Based on the results of such surveys and research, the evidence-based programme is developed. Not only the rules-based anti-doping education is developed and implemented but also the “values of sport” education delivery and materials are develop. The communication message is also based on evidence in order to ensure the message around the values and power of sport matter to the public, the athletes and a wide range of sport persons.

*All social science research conducted by JADA are commissioned by the Ministry of Education, Culture, Sports, Science and Technology and the Japan Sports Agency.

The Phases of Behavioural Change – Champions in Society and Sport 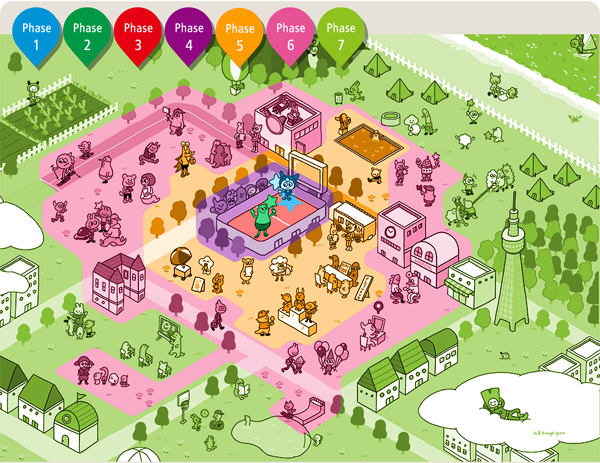 Seven phases have been identified in the “Real Champion Education Package” developed by JADA. The seven phases identify the relationship between those receiving the education (as “target”) and sport or society. In each phase, the objective of a behavioural change is set as a step-by-step approach. The objectives of educational activities and sessions for each phase have explicitly been established, enabling those involved (like deliverer or educator) to see the evaluation points. The achievement levels can be assessed comprehensively through monitoring and evaluating the behavioural change over time. The Education Package teaching materials can be customised using incremental steps according to the phase. It is aimed develop a ‘real champion’ and leader in sport and in society.

★ The research evidence for the “phase” concept is from “Ten Questions on ‘Fairness’” survey and research. See more details

JADA’s surveys and research include not only targeted a wide range of those involved in sport – such as athletes and athlete support personnel – for the purpose of promoting anti-doping activities but also research into the public on their attitudes towards fairness and sport integrity in order to promote the sport values-based education.

★ Summaries of surveys and research carried out by JADA can be downloaded from the following.
For further inquiries, please contact: playtrue2020.info@playtruejapan.org

The analysis of survey data from the public of three countries - the Singapore, Japan and UK - regarding the public opinion towards doping and other ethical/unethical issues and dilemmas. The previous analysis of the relationship between law-making, public opinion and behaviour in broadly similar was conducted to explore the effectiveness of law in changing behaviour of public.
It was found that the most common bases for opposition to doping were the values of sport or spirit of fair play rather than other possibilities such as potential damage to an athlete's health, which received very low scores in all three countries. The implications for anti-doping education are discussed based on the findings. DOWNLOAD

Sport Integrity: A Global Framework Including Anti-Doping and Some Prevention Programmes

Given the fact that the issue of integrity in sport has widely been paid attention and discussed, there is very few papers on the comprehensive picture of the issue as well as sport integrity and corruption in general.
This report intends to give a comprehensive picture of integrity and its contrary (corruption in sport) that encompasses all the different malpractices that have emerged in recent years (including doping, match-fixing, abuses, poor governance, lack of sustainability, harassment, addiction to substances, bribes, etc.). It is intended to provide a global framework for sport integrity based on four interlinked facets to sport corruption. The research explores to help design more effective educational programmes to foster sport integrity. DOWNLOAD

According to the previous years' surveys conducted to the Japanese and British public, this survey was conducted to the Singapore public on their opinion towards doping and other forms of unfair/unethical behaviour in sport.
The survey suggests that the Japanese and Singaporean respondents had similar values of assessing fairness in sport. The most heavily weighed values are good sport ethics and equal conditions for athletes. The next heavily weighed value was different between the two countries. They were values of relationship with other humans (Japan) and your own beliefs (Singapore). DOWNLOAD

Research into public attitudes towards doping in sport is limited, but suggest that across a range of countries there is a strong support for anti-doping rules and sanctions. It is not clear, however, which factors influence changes in individual and collective judgement of behaviour as either acceptable or unacceptable, but cultural reference points and existing laws are considered to be important.
This research was based on the findings from the previous years' survey on the Japanese and British public on their opinion on doping and other forms of unfair/unethical behaviour in sport. The sub-groups such as age and gender was also compared within each country and between the two countries. The research also analysed the relationship between law-making, public opinion and behaviour.
The data suggests that the general public assess the nature of an action in sport from their own experience in their normal daily life in both countries. It suggests that the anti-doping programme design needs to have a careful consideration of national context whilst the Code illustrates a universal set of regulations. DOWNLOAD

Comparative Research on the Public Awareness of “Value of Sport” and “Fairness" in the U.K.

The British public's opinion on doping and other forms of unfair/unethical behaviour in sport has been surveyed by using the same instrument as to the Japanese public in 2013.
(4,092 respondents weighted to be politically and demographically representative). DOWNLOAD

With the fact that the latest national curriculum for PE & Health in the Japanese high school identifies the "Olympic Movement and Doping/Anti-Doping" as 'mandatory' teaching area, this study put together the practical examples of Sport Values-Based Education based on the survey findings on the Japanese public awareness of “Value of Sport” and “Fairness" in sport.

The research was targeted the Japanese top-level athletes (senior, youth included), the athletes at the levels of the international competition and national championships belonging to the university and coaches with 3,400 respondents (325 athletes, 168 youth athletes, 2,848 university students athletes, 32 coaches, 27 parents). The research objective was to identify athletes’ attitude towards values of sport (especially fairness in sport) and to understand their influencers both in sport and as human-being depending on ages as well as the desired figure as a top athlete. Since 2013, this study was carried out study on the general public of 4,800 people, the results between the public and top athletes are compared for analysis in this study. DOWNLOAD

Literature Review on "Fairness" for its Conceptual Understanding of the Japanese

The aim of the literature review on the societal and psychological groundings of the Japanese attitudes towards "fariness" was to put into the context of the findings from the public awareness of "values of sport" and "fariness" (from 2013FY). It ranges from sociological understanding of ethics which the Japanese passed among the family and the public to the community buidling including the individualistic vs collective orientations.

In order to understand how “PLAY TRUE Book: Anti-Doping Athlete Guide" prepared by JADA is distributed to those participants for Kokutai, the National Athletic Meet. A questionnaire survey and interview were also conducted to prefectural athletic associations. The other questionnaire survey was also conducted during Kokutai on the recognition of this PLAY TRUE Book and understanding of anti-doping.
The results showed the distribution status of the PLAY TRUE Book to the necessary end-user, namely, athlete. The athletes' active involvement in anti-doping activities was shown as challenge. Having these results, the research summarized the direction of utilizing education kit for seminar session, intervention of coach and support staff, various coordination and other future activities. DOWNLOAD

With the aim to grasp the public awareness of value and fair/unfair of sport as well as doping to make them as a reference for education/awareness raising activities and information dissemination, web questionnaire survey was conducted targeting general public in Japan. The total of 4,800 respondents, the equal female-male ratio as well as the demographical representative.
The results revealed that an image of “doping” = “unfair” have been established in the public awareness, fair/unfair was decided by three axes: equal conditions, sport ethics, and human ethics, and anti-doping is a concrete object of fairness with multi-faceted aspects. Having these results, the research summarized the future direction of education /awareness raising as well as information activities on the theme of “fair” and “unfair.” DOWNLOAD

Survey on the Use of Supplements among College Athletes

Against a backdrop of numerous anti-doping rule violations, which involved athletes carelessly ingesting prohibited substances contained in supplements, a questionnaire survey on awareness of supplements was conducted. The survey was conducted targeting the college athletes who have more freedom and independence compared to the high school students or younger and who are also required to do self-management at training . The survey results showed that the college athletes tend to rely on the specific supplements and that those who use supplements less frequently were at considerable risk. DOWNLOAD 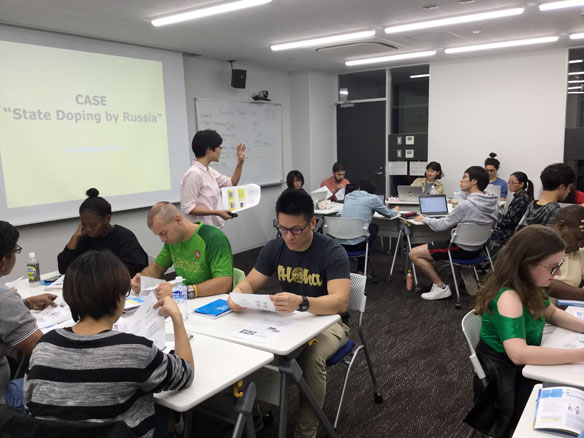 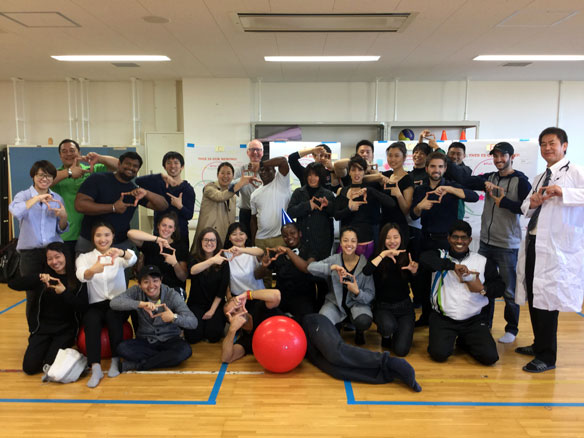 Target: TIAS Master’s course students (MA in Sport and Olympic Studies) Content: By referring the University Anti-Doping Textbook by WADA, the materials from JADA’s Real Champion Education Package is utilised ・Specify learning goals based on the behavioural change set in “phases” ・Group discussions for a better understanding of the overall global framework and concept of anti-doping, as well as the utilization of case studies related to sport integrity and anti-doping ・Active learning, such as “New MO!” session (originally created by JADA), in order for the students feel and embody the “values of sport” ＊The University of Tsukuba and JADA concluded a comprehensive partnership and cooperation agreement in November 2013. For more details in Japanese. https://www.playtruejapan.org/topics/2013/000143.html 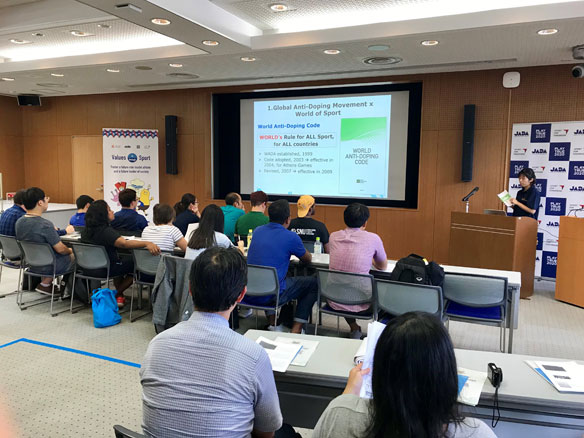 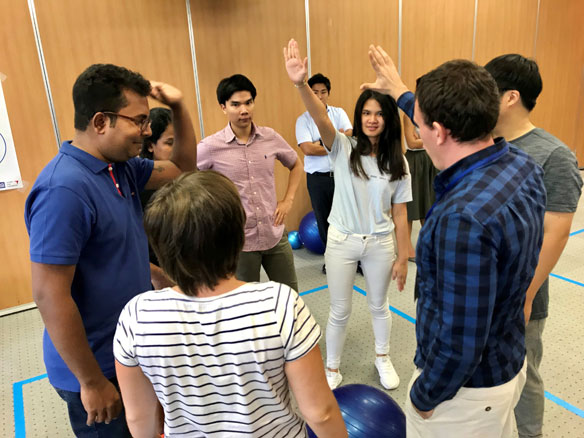 Target: Young coaches and researchers from Asia participating in the sport management course (focused around the operation of sporting events), and the sport performance course (promotes research on medical support and practical knowledge that leads to enhancing the competitive performance of athletes) Content: Provides a wider perspectives for global sport framework of sport and anti-doping •Outline of anti-doping and related rules and framework •Case studies and active discussions •Active learning session with “New MO!” for embodying the “values of sport”, and developing messages ： See "New MO!" Rule Introduction Movie