The 2022 seminar was held on 18-19 January as online, GoVirtual!, due to COVID-19 ongoing global pandemic. 250 colleagues from 52 countries and regions registered and the seminar intended to create interactions among participants though distance.
The seminar was designed to share the journey of Tokyo2020 legacy created with Clean Sport community and various partners towards, and during, the Tokyo2020 Games. In particular, PLAY TRUE 2020, Sport for Tomorrow initiative placing anti-doping as the core legacy pillar, was highlighted.
Mr. IKEDA Yoshitaka, State Minister for the Ministry of Education, Culture, Sports, Science and Technology (MEXT) as well as WADA Executive Committee member representing Asia, gave a host welcome. In his keynote speech, Mr. Witold Bańka, WADA President, commended PLAY TRUE 2020 bringing anti-doping to the next level by placing it forefront of the Games legacy. WADA Directors and Managers were present to make presentation to build knowledge and capacity of Clean Sport Community in Asia and Oceania regions.
The Athlete Panel was one of the highlights of Day2: Dr. MUROFUSHI Koji OLY, Commissioner of Japan Sports Agency and former WADA/JADA Athlete Committee member, was joined by Ms. Kadidiatou Tounkara OLY, Chair of Education Committee, WADA. They discussed the importance of ensuring the fundamental principles of International Standard for Education: “Educate before Testing”; and “Educate before sending athletes and support personnel to the international events” for protecting the Clean Sport environment. 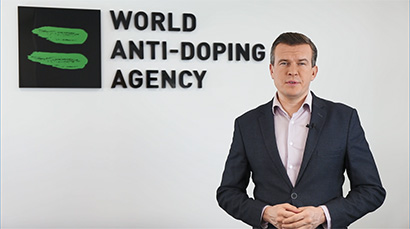 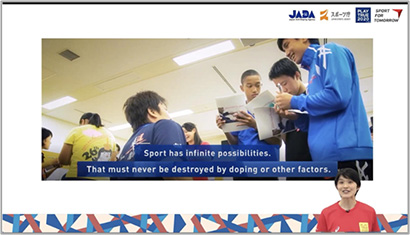 Mr. IKEDA Yoshitaka, State Minister for the Ministry of Education, Culture, Sports, Science and Technology (MEXT) as well as for the Cabinet Office, conveyed his warm appreciation to all who contributed to the Tokyo2020 Games. In his opening video message, Japan’s continuous commitment to realising Clean Sport even after the Games was stressed for the future of sport.
Mr. Witold Bańka, WADA President, conveyed his appreciation to Japan’s commitment to Clean Sport through PLAY TRUE 2020 Sport for Tomorrow, Tokyo2020’s legacy project. He mentioned the importance of this legacy project as this was the first time that a hosting nation of the Olympic and Paralympic Games prioritized anti-doping by placing it as a core legacy pillar. Mr. Bańka stressed how Clean Sport – particularly in the area of education – will be benefited from the success of this legacy project, which he hoped to carry into the future major events.
PLAY TRUE 2020, the legacy initiative to create and protect the clean and fair sport in the lead up to, and during, the Tokyo2020 Games, has been summarized by Dr. YAMAMOTO Yaya, who has led the legacy creation team since Tokyo was award to host the Games in 2013. The 8-year journey and its strategies were explained along with main projects such as the “Real Champion Education Package” and the “PLAY TRUE Relay” and ”i-PLAY TRUE Relay”. The trajectories behind the scene of making “SPORT & ART”, which transformed the messages and photos of sport values from the world into a Work of Art, were shared. The “living legacy” created through PLAY TRUE 2020 is now being relayed into the future!
The major players of Doping Control during the Tokyo2020 Games were gathered to discuss. Those “Firsts” were highlighted during the Tokyo2020 Clean Sport Panel session to reflect Anti-Doping Program of Tokyo2020 Games:
Some learnings and takeaway lessons were shared by the Panel, including some challenges under COVID-19 situation and further strengthening of Clean Sport Community particularly when a NADO becomes an international event’s hosting country’s anti-doping agency.
Mr. OKANO Masato, Director of WADA Tokyo Accredited Laboratory, reflected the operation of the Tokyo2020 Satellite Laboratory from the preparation and postponement to the Games’ time. Ms. Ling Lin, Director of Doping Control for Beijing 2022 Games, introduced the preparations, just ahead of the Beijing 2022. 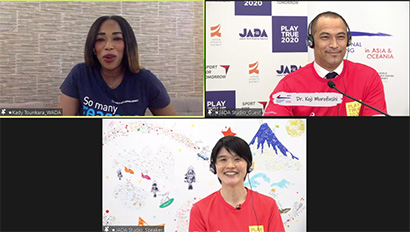 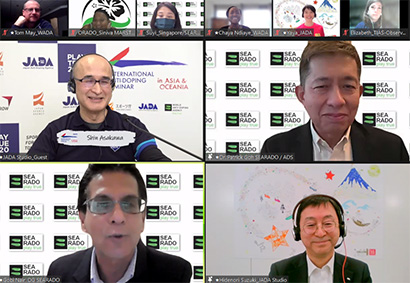 Mr. Olivier Niggli, WADA Director General, updated the progress of WADA’s “Five-Year Strategic Plan” under the theme of ‘Leading Anti-Doping in a New Era’. The renewed WADA Corporate logo and website were unveiled to the seminar participants with its concept.
Mr. Kevin Haynes, WADA Associate Director of Compliance, Rules and Standards, outlined the upcoming Code Compliance Questionnaire (CCQ, which is the written questionnaire to the Code Signatories to check the compliance with the World Anti-Doping Code) with its schedule and the main changes from the previous CCQ.
The Athlete Panel was joined by Dr. MUROFUSHI Koji OLY, Commissioner of Japan Sports Agency and former WADA/JADA Athlete Committee member, and Ms Kadidiatou Tounkara OLY, Chair of Education Committee, WADA. Highlighting PLAY TRUE 2020 as one of the best practices of athlete and public engagement, they argued the significance of spreading the values of sport led by the Clean Sport Community and the athletes engaging themselves in anti-doping programme. The fundamental principles of International Standard for Education: “Educate before Testing”; and “Educate before sending athletes and support personnel to the international events” were discussed from athletes’ perspectives. They exchanged the ideas on how those principles can be achieved for ensuing the Clean Sport environment for all.
The function and further planned development of WADA Paperless System: DCO Central were explained by Ms Ndiate Chaya Ndiaye, WADA Product Senior Manager (ADAMS Lead). To promote the evidence-based education and policy development, Dr. YAMAMOTO Yaya, WADA Education Committee member, outlined the renewed WADA Social Science Research (SSR) strategy. By introducing how JADA developed its education programme based on research findings, Asia-Oceania members were encouraged the use of research data.
Under the title of “Clean Sport Partnerships”, NADO-NADO/NADO-RADO partnerships were showcased to emphasize the benefits from working together. Cross talk sessions: i) China, Korea and Japan for 3 NADO Partnership; and ii) SEARADO-JADA 3 times MOU Partnership illustrated our strong ‘scrum’ for protecting a Clean Sport environment worldwide.